I was driving my truck (Big Blue) on Friday and was thinking to myself, Sat should be a good day to Kayak MTK. Fished in Tourneys over the last few weekends and this weekend was back to the grind and local waters. I then thought about who has been asking to go and as I was thinking, my phone rang and it happened to be one of the guys who I was about to call. His first few sentences focused on going Kayak fishing on Sat. Perfect. So, the wheels were in motion for a Sat am meet up which we did. After breakfast, we loaded the 2013 Hobie Revo and the 2015 Outback and Wickie and I were off to the races. We drove to a few spots to check the water conditions and wind, etc. Due to his limited kayak fishing experience, I figured we would find a nice back bay spot and make it more about the learning experience and less about purely catching fish. Not to mention white caps would have made the experience less enjoyable then a nice flat bay loaded with birds diving on bait. Wickie was game and opted for smooth sailing over fishy rough seas. After the instructional and safety briefing, we were out and about and steaming towards diving birds. One rod had a tube on it and the other had a lure ready to cast into the blitz. While we employed all tactics, we learned that basically the birds were on the bait but the fish were not. A few boats (fly and casting) had the same result. Eventually we left the birds and checked out some coastline spots, structure and different terrain. While we didnt have time to fish into the evening, the trip was such a success that my friend was hooked on the sport and ended up buying my Revo which was for sale. It was a win win since he now has his own and I was able to place a down payment on the new 2016 Limited Edition Hobie Outback in Orange (Only 500 being offered by Hobie Corp.). Stay tuned for pics of the newest edition to the fleet and all the best to Wickie in his Kayak and Kayak Fishing adventures.
Almost forget this other part so here it is. Knowing I had a charter in MTK, I had to pick up my Revo which was at a North Shore marina since we have been kayak fishing for Albies at the location. While there, I checked out one of the beaches and noticed birds diving and tails coming out of the water. I immediatly thought the Albie bite is still going strong before realizing they were much bigger then Albies. So, without missing a beat, I suited up, grabbed the surf gear and got into the fray. Since the first few casts went unanswered, I put on a pre rigged Red Gill leader and teaser set up I bought from Paulies and threw on an A-17 Diamond jig. First cast with that and boom. For the next hour or two, it was just me, the beach, birds, bait, bass and blues. In fact, I caught my first double header. See Pic. Yep, a bass on the Red Gill and a Blue on the Diamond Jig. At first, I thought it was a larger fish since I was into 10 and 12 pound blues and also dropped a nice bass. But, once beached, I was stoked to see the double header, took a pic and got these beauties right back into the water. I caught around 10 bass and 5 blues within two hours. Got some nice pics footage of the blitz and kept one bluefish for my friend’s Grill. As the bait was thick on the sand flats, always recommend having a few Red Gill leader set ups in the ole surf bag.
Sunday decided to hit some Jetties East of MTk and then double back towards the light. While the water was clean and clear, the bite was off and the normally packed fishing spots were empty. The seals however were all over the place and put on a nice show for tourists showing up for the sunset. Not to sure if the seals found what they were looking for but like us fisherman, they seemed to be having a blast trying to find fish. Till next time, tight lines. 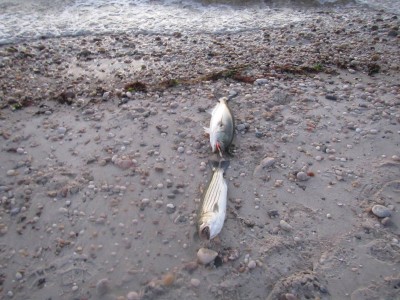 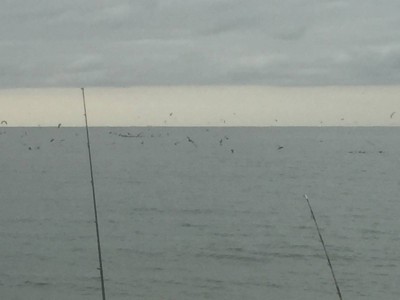 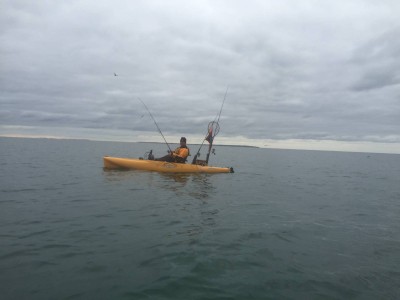 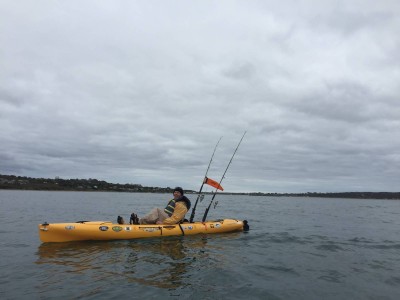 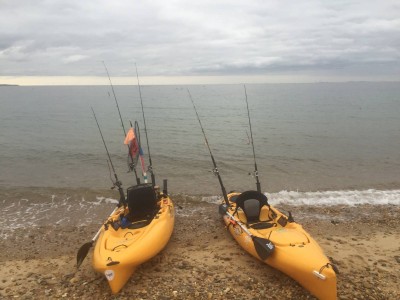 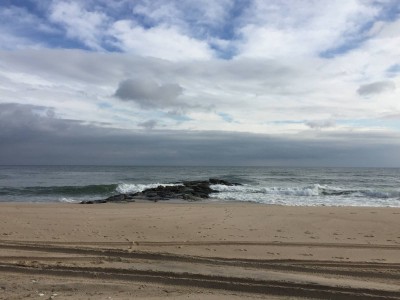